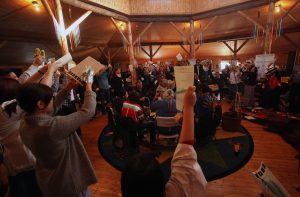 Since September 2014, the Public Interest Law Centre (PILC) has collaborated with the Assembly of Manitoba Chiefs to engage with the families of Missing and Murdered Indigenous Women and Girls (MMIWG), Elders and a coalition of service providers.

Together with our partners, PILC has proposed a made-in-Manitoba Indigenous-led process to address the tragedy of MMIWG. In July 2014, the AMC Chiefs in Assembly unanimously endorsed “Families First: A Manitoba Indigenous Approach to Addressing the Issue of Missing and Murdered Indigenous Women and Girls,” the report that emerged from this process.

The initiative proposes both national and regional components to the national inquiry.

In response to pressure from the Manitoba Keewatinowi Okimakanak (MKO) and the prospect of a court challenge initiated by PILC, the Manitoba government issued a temporary moratorium on uranium exploration licences issued in the traditional land of the Northlands Dene First Nation.

In 2009, this led to the development of a consultation protocol and an economic development agreement that provided the First Nation with a greater say in the conduct of and sharing of benefits related to mineral exploration activities on its traditional lands.

PILC represented a number of First Nations hunters who had been charged with the unauthorized use of Crown lands. They argued that their First Nations had an unextinguished Aboriginal title to the area in question. While the Manitoba government did not explicitly accept the existence of unextinguished Aboriginal title, it conceded that the charges were not valid and stayed them in 2005.

Jordan was born in 1999 with severe physical, intellectual and cognitive disabilities. While his family lived on the Norway House First Nation, Jordan’s complex medical condition required that he receive hospital treatment in Winnipeg.

Eventually, arrangements were made for Jordan to leave the Winnipeg hospital and live with foster parents in Winnipeg. However, the placement could not be completed until an agreement was reached between the federal and provincial government as to which level of government was responsible for covering the costs of Jordan’s care.

By the time an agreement was reached, Jordan’s health had deteriorated to the point that he could not leave the hospital. He died in 2005 without ever having spent one night in a home with a family caring for him.

With the assistance of PILC, the Assembly of Manitoba Chiefs developed the concept of Jordan’s Principle. After his death, Parliament unanimously adopted Jordan’s Principle, a resolution committing the government to ensuring that First Nations children have access to health care ordinarily available to other Canadian children without experiencing any service denials, delays or disruptions related to their First Nations status.

In the late 1980s, PILC took a case on behalf of the Barren Lands and Mathias Colomb First Nations in northwestern Manitoba. The lands of both First Nations were subject to flooding as a result of water regulation on the Churchill River by the Saskatchewan Power Corporation (SPC).

Efforts to negotiate a compensation agreement had proven fruitless since SPC had refused to acknowledge any damage or responsibility.

PILC took SPC to court for having failed to acquire a Manitoba licence for the flooding caused by the company’s operations in Saskatchewan. SPC sought to have the case thrown out of court, but both the Manitoba Court of King’s Bench and the Manitoba Court of Appeal ruled that there was an arguable case for trial and that the First Nations had standing to make the case.

When the Supreme Court declined to hear an appeal of these rulings, SPC agreed to commence an out-of-court negotiating process.