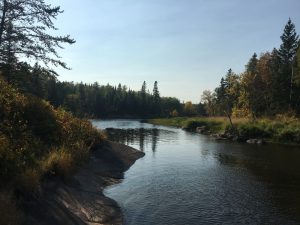 Between 2003 and 2015, the Public Interest Law Centre (PILC) participated in a series of regulatory proceedings before the Manitoba Clean Environment Commission and Manitoba Public Utilities Board (PUB), which led the Manitoba government to halt development of the $10.5-billion Conawapa hydro-electric generating station.

PILC had argued that in light of the high-risk business case presented by Manitoba Hydro and its ability to defer construction through cost-effective energy efficiency programming, the development was not required. The hearings also led to recommendations for:

Proposing Changes to The Environment Act

In 2015, the Manitoba Law Reform Commission (LRC) recommended wide-ranging changes to the Manitoba Environment Act which were aimed at modernizing the Act, providing a greater role for public and Indigenous input, and recognizing the importance of expressly addressing cumulative effects. PILC had originally proposed the topic of Environmental Act reform to the LRC and PILC staff played a major role on the LRC committee.

In 1986, Winnipeg City Council approved a zoning application that would have opened the way for the development of two condominiums on riverbank property in north St. Boniface. This was not in keeping with the city’s overall plan, which had designed the land for use as a park.

PILC opposed the decision on behalf of a local residents’ association. While PILC eventually lost the case at the Supreme Court, the court challenges delayed the start of the project for a considerable period of time, creating financing issues for the developer who eventually resold the land in question back to the City of Winnipeg.

In the mid-1980s, a development corporation sought to build a 16-storey apartment complex over Omand’s Creek just north of Portage Avenue in Winnipeg. The creek bed would be filled in for nearly 200 metres and its flow diverted through two culverts.

Winnipeg’s Rivers and Stream Committee approved the project, arguing that its responsibility was simply to make sure development did not impede stream flow or impair bank stability.

PILC took the case on behalf of the Manitoba Naturalists Society, arguing that the project violated The Rivers and Streams Act. Following PILC’s intervention, a resolution emerged that saved the creek while allowing the developer to go ahead with the project in a different location. In the wake of the controversy, the provincial government provided funding for the creation of what is now Bluestem Park.