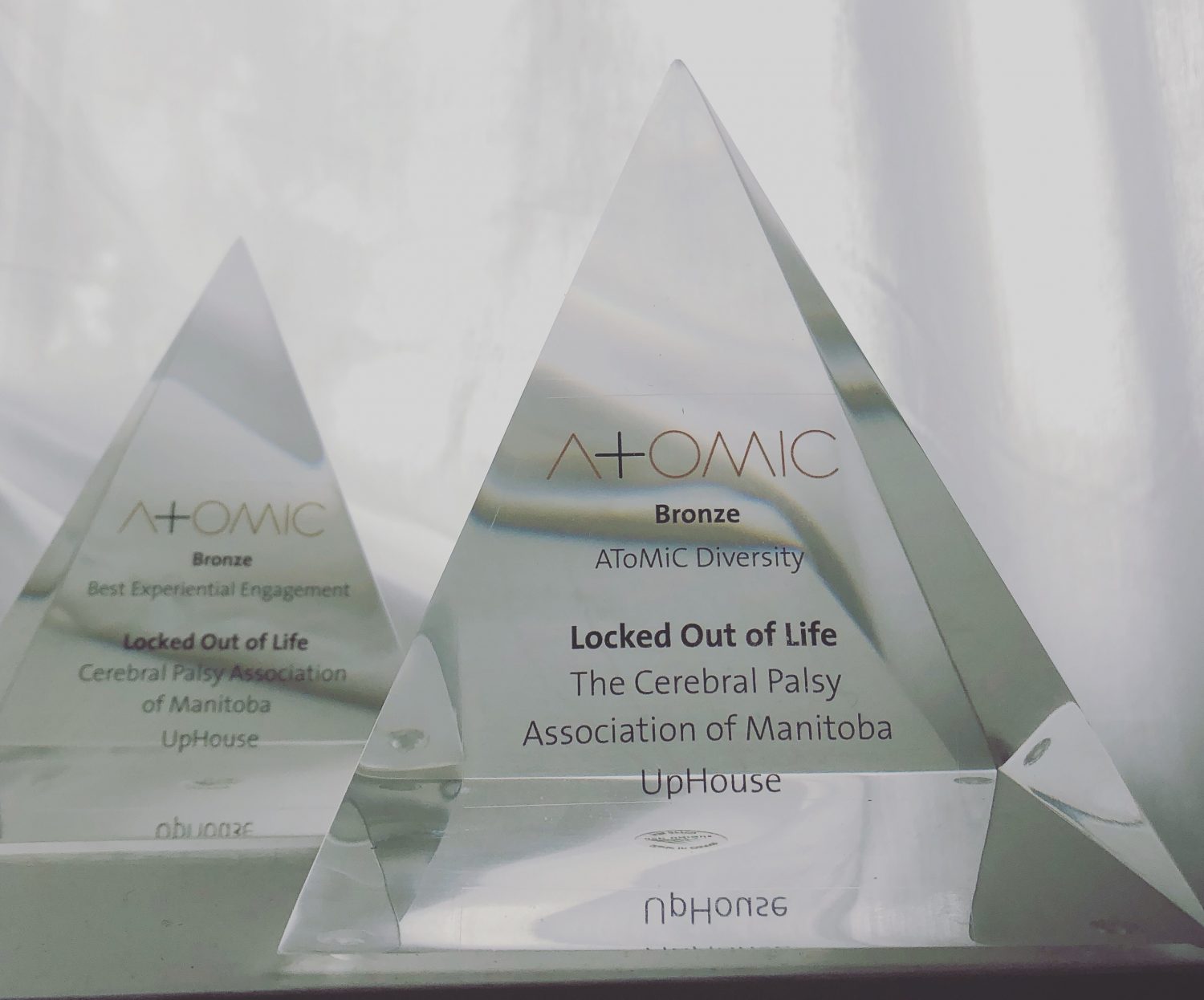 Winnipeg, Manitoba, Canada (March 6, 2019) –– Yesterday, UpHouse, a local brand and marketing agency, won two national advertisement awards for a campaign which raises awareness for the plight of Manitobans with physical disabilities. The awards were distributed at the AtoMiC Awards Ceremony in Toronto (Ontario) which celebrates the nation’s top advertising and public service content.

Adults with physical disabilities in Manitoba lack the fundamental care required to participate in the community. They often find themselves feeling locked up at home, waiting on minimal home care hours to cover basic needs, and feeling removed from the society they used to know.

Tyson Sylvester and Amy Hampton, two adults with significant physical disabilities, filed human rights complaints against the Province of Manitoba and the Winnipeg Regional Health Authority to achieve inclusion and services that would allow them to go to school, work, volunteer and see their friends in the community.

As part of the campaign, a short video was created by UpHouse in collaboration with Wookey Films. The video is visibly provocative. It features Tyson locking himself in a jail cell in the middle of Winnipeg’s busy Old Market Square. The stunt motivated people to walk up to the jail cell and listen to a recording of Tyson telling his story.

The impact of the campaign spread quickly, earning media attention and quickly reaching over 160,000 people on Facebook, earning over 100,000 views and over 1,600 shares. More than 2,400 people have signed a petition demanding better services for adults with physical disabilities in the province.

UpHouse won two bronze awards yesterday for their work on the Locked out Life campaign – one for Best Experiential Engagement and the AToMiC Diversity award.

“We’re honoured to be recognized by an event known its high calibre of creativity, but most importantly, the national attention will bring even more awareness to the issue that this campaign was created to highlight,” says Alex Varricchio, co-owner of UpHouse.

On the AToMiC award wins, Tyson says, “I’m really glad that people are paying attention and realizing that this is a systemic issue all across Canada. This is just proving that it doesn’t just have to do with two or three people, this has to do with a huge population.

About The AToMiC Awards

The AToMiC Awards celebrate campaigns across Canada’s media and marketing industries. This year’s panel selected 27 public service shortlist mentions. Among the campaign winners in the Public Service category were the Canadian Down Syndrome Society’s “Anything But Sorry” campaign and the United States Against Gun Violence’s “Backfire” campaign, which auto-sent tweets to U.S. President Donald Trump from registrants’ accounts any time gun-related deaths occurred in the country.

UpHouse is a brand and marketing agency. The company works collaboratively with clients to invigorate their brand position, create achievable marketing plans and cultivate the skills of their creative people.