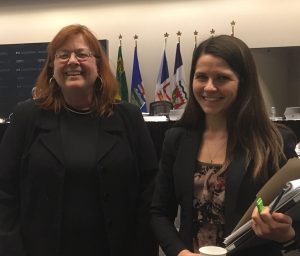 On Tuesday October 23, 2018 a coalition of Manitoba organizations, represented by the Public Interest Law Centre, presented at a Canadian Radio-television and Telecommunications Commission (CRTC) hearing in Gatineau, Quebec, asking commissioners to find that there is systemic use of misleading and aggressive sales practices from telecommunications companies in Canada.

The Manitoba Coalition consists of Winnipeg Harvest and the Manitoba Branch of the Consumers’ Association of Canada. Over the summer 2018, the Manitoba Coalition engaged with more than 1,000 Manitoba consumers and found that while Manitobans care deeply about their telecommunications and broadcast services and see them as a critical tool toward achieving social and economic inclusion, many consumers, and particularly vulnerable consumers, experience challenges with misleading or high pressure retail sales practices.

While many consumers had fairly high regard of their service providers, a survey of 1,000 Manitobans found that:

The Manitoba Coalition urged the CRTC to recommend that: